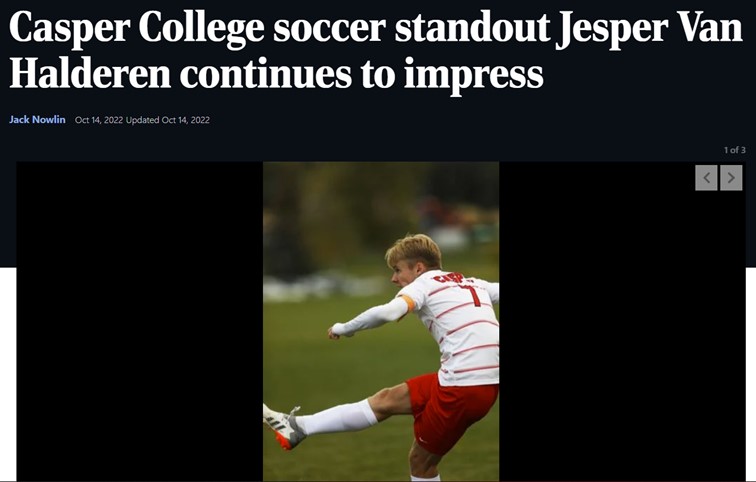 The forward from The Netherlands enters the Thunderbirds’ final regular-season game Saturday against Central Wyoming College with a team-best 13 goals, nine assists and 35 points. Van Halderen leads Region IX in all three categories and also is in the top six nationally in all three.

The third-year sophomore is a big reason why the 19th-ranked T-Birds (12-3-1, 5-1-1 Region IX) have a legitimate chance of qualifying for the National Junior College Athletics Association Division I Championships for the first time in the program’s three-year history.

“From top to bottom this is the best team we’ve had in terms of talent and work ethic and desire,” T-Birds head coach Ben McArthur said before a recent practice. “We are deep everywhere. We can wear teams out.”

Although the T-Birds’ depth and talent is impressive, the 6-foot-2 Van Halderen gives Casper College even more of an advantage.

“Jesper’s got a knack for scoring goals,” McArthur noted. “When he gets inside the 18-yard box and the ball is on either foot he’s going to put it on frame and the keeper is going to have to make a save. That, in a nutshell, gives you an opportunity every time.”

Van Halderen’s goals haven’t come in bunches this season. He scored two goals, including the game-winner in the 89th minute, against College of Southern Nevada and two in a victory over Western Nebraska Community College, but had just a single goal in nine games. In two of the three games in which he didn’t score, Van Halderen had an assist.

“He’s not banging three or four goals in against bad teams,” McArthur said. “He’s scoring basically a goal a game. Obviously his focus in front of the goal has been very precise this whole year. He knows he can score goals and he’s good at it.”

Van Halderen demonstrated that his first year at Casper College when he had nine goals and five assists for the T-Birds, who won the Region IX regular season and were ranked No. 7 in the country before losing to Otero Junior College in the semifinals of the Region IX tournament.

Now in his third year playing for the T-Birds, Van Halderen said he finally feels comfortable playing the American game that McArthur stresses.

“Back home it was all about keeping possession,” he added. “You could have the ball for 10 minutes creating nothing, but you needed to keep the ball. Here it’s more we sometimes need to create and we don’t have to have the ball. But I think I’ve adapted to the playing style and the players around me make it easier for me to get into the positions I need to be in.”

McArthur isn’t surprised Van Halderen has become a more dangerous scoring threat during his time at Casper College. The improvement in his overall game, though, has been a big bonus to the T-Birds.

“We knew this jump was possible,” McArthur said, “but we didn’t know what it was going to look like. He’s always been a passionate player, but he’s matured. He’s starting to figure out how to communicate with his teammates properly and how to hold them accountable.

“He’s raised his level of defensive effort and his set piece delivery on corner kicks and free kicks has been really good.”

As his final year at Casper College winds down, Van Halderen has raised the bar for the T-Birds’ expectations. They’ll be either the No. 1 or No. 2 seed at next week’s Region IX tournament and have their sights set on making it to nationals.

“Our one goal is making it to nationals,” Van Halderen, one of the team’s captains, said. “And then when we get there … winning it. There’s no one on the team who doesn’t work for that so it makes it easier for everyone.”

While Van Halderen is the team’s primary offensive threat, the T-Birds have numerous other players who can put the ball in the back of the net.

Freshman forward Cole Venable, the two-time Wyoming Gatorade Player of the Year at Worland, and freshman midfielder Lewis Gordon from Australia have six goals apiece. Midfielders Jayden Chudeu from Canada and Louis Simon from France have each scored three, and defenders Jules Foll from Belgium and Kota Yamanashi from Japan have two. Ten other players have one goal on the season.

“Jesper is now a marked guy,” McArthur said. “Every game we play he gets the other team’s best effort. They’re sending two defenders at him.”

For Venable, who netted 102 goals in three years for the three-time Class 3A state champion Warriors, playing alongside Van Halderen has been a learning experience.

“Jesper is just a phenomenal player,” he said. “Everyone who comes to our games can see just how high-level he is. He works hard every day in practice and he’s so composed in front of the goal. As soon as he gets the ball anywhere within 25 yards of the goal you know it’s going in. I want to mimic my game after that and become more clinical in front of goal like Jesper.

“And he has such a high soccer IQ,” Venable added. “He always knows what to do with the ball before it’s coming. He can see the runs of the other players. He knows what the defenders are going to do. He knows everything about the game and I think that’s what’s so special about him.

“He’s a great player physically and technically, but also mentally he’s one of the best players out here.” 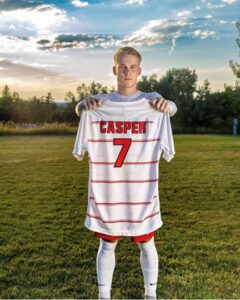 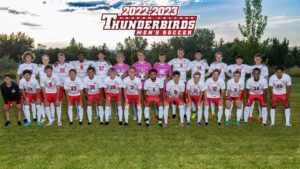